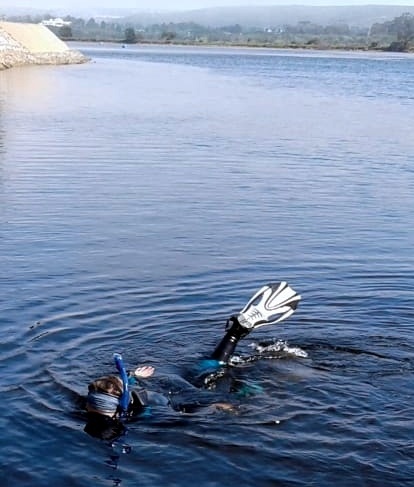 We live in a changing world – the tides, the seasons, and now even more importantly our climate. With the threat of sea-level rise, we hurry to protect our properties and within the Keurbooms Estuary, the threat of flooding is known only too well. To combat the erosion caused by floods artificial structures are placed along its banks but what does this mean for the creatures living amongst the mud and seagrass?

My masters has brought me to this beautiful corner of the world and with it a whole new look at how we use our estuaries. The main focus of this study was to see whether there are any differences between a natural habitat such as the meadows of Eelgrass (Zostera capensis) and the harder artificial structure called Reno mattress, which basically is a flattened wire box that gets filled with rocks used for erosion control. A new section of Reno mattress has been placed on the eastern bank of the estuary and I’ve been keeping a close eye on its developments.

Since 2018 I’ve collected samples of small critters and placed cameras to spy on the fish that call this estuary home. I wasn’t surprised to find that during summer there was an explosion in the number of fishes from the plentiful Cape Stumpnose to the curious Spotted Grunter and even a few hungry juvenile Garrick (Leervis). An estuary acts as a nursery for many animals and during the warmer summer period, they take full advantage of the safety it provides. It’s a bit like watching a busy bus station with fish darting here and there, chasing one another to get a better chance of grabbing the bait. Interestingly the Reno mattress with its crevices and hidey-holes provided a place of refuge to a number of more cryptic species. Gobies and Klipvis pop their heads out of the structure only to disappear into it as you swim passed, and the Knysna seahorse hangs on to the wire for dear life. The fish of the Keurbooms Estuary seem to be increasingly attracted to this new habitat, and although more individuals can be seen eating off of it the species found are still similar to those in the seagrass.

As for the invertebrates (anything without a backbone- like crabs and bugs), they still prefer the seagrass beds. These underwater grasslands are teeming with critters and what they particularly love is mud and lots of it that’s why the Reno mattress cannot compare as it has far less sediment to burrow into. There are, however, critters that find being stuck to a rock is an excellent place to be and as the Reno mattress is mainly hard it’s a perfect place to expand to. If you have ever been to a rocky shore you have probably stepped on a number of hard pointy barnacles. These guys are great at living on hard structures and before long the Reno mattress will become covered in them along with mussels and oysters. Which of course to the residents of Keurbooms sounds excellent but it still needs to be determined how this will impact the fish that rely on gorging themselves on the mud-dwellers.

This study still has a few months to go and I will still be splashing around in the water come rain or shine but it is nice to see that already there is a pattern forming. We definitely should not replace all our Eelgrass with these artificial structures but hopefully we can gain insight into what happens when we meddle with our estuaries. An estuary has an importance that many people do not recognise it is more than just a beautiful place to paddle down there is a whole world underwater just waiting to be seen.